TThe human X-chromosome carries ~20-30% of genes associated with intellectual disabilities. Mutations of genes on the X-chromosome account for up to 20% of Autism Spectrum Disorders (ASDs). Epimutations on the X-chromosome have also been associated with several mental health conditions (i.e. depression, bipolar disorder, schizophrenia) and neurodegeneration. Female mammals silence one of the two X chromosomes to achieve dosage compensation to males through random X chromosome inactivation. As a consequence of this process, females carrying an X-linked mutation silence either the mutated and the wild-type (WT) copy of the gene, generally in a 50-50 ratio. Therefore, females have a natural “reservoir” of non-mutated dormant genes that can be reactivated. It is possible to reactivate “dormant” X-linked genes by drug treatment that “deactivate” the master regulator of X inactivation, the long non-coding RNA (lncRNA) Xist. Blocking the interaction of Xist with silencing partners can weaken its function and reactivate genes on the inactive X-chromosome. Reactivating the dormant genes can normalize protein levels and result in functional phenotype rescue. To identify small molecules that can specifically block Xist RNA interaction with silencing partners, we will screen for compounds that reactivate the silent wild-type copy of MeCP2 and Cdkl5. Mutations of these genes are causative of Rett and CDKL5 syndromes, respectively, which are very debilitating ASD/intellectual-retardation diseases. Crucially, the conditions associated with mutations in these genes do not lead to neurodegeneration, which makes them curable in the post-natal/adult state, as shown by previous research.

Line of Reserach #1
Fig. 1 Xist works as a molecular scaffold to recruit proteins and induce gene-silencing of an entire chromosome (one of the two X chromosomes). Blocking the interaction of Xist with silencing partners can weaken its function and reactivate genes on the inactive X-chromosome. Reactivating the dormant genes can normalize protein levels and result in functional phenotype rescue. To identify small molecules that can specifically block Xist RNA interaction with silencing partners, we are currently screening for compounds that reactivate the silent wild-type copy of MeCP2 and Cdkl5. We will use the gain of fluorescence from the Xi-silenced reporters as a mean of reactivation of the inactive X chromosome.

Discovery and characterization of novel classes of brain-specific lncRNAs

Work in cell lines and mouse models supports the hypothesis that lncRNAs are essential mediators of cellular functions regulating different gene expression levels. LncRNAs have been shown to work on four regulatory levels: As macromolecular scaffolding for protein recruitment As molecular sponges for sequestering regulatory ncRNAs, mRNA or proteins As a genomic 3D organizer As cis/trans-regulatory elements regulating transcription and RNA-splicing A prominent example of a multitasking lncRNA is Xist, the master regulator of X chromosome inactivation (XCI). lncRNAs are fundamental regulators of gene expression. We believe that it is possible to hypothesize the existence of “master” lncRNAs regulating hundreds of genes during brain development. 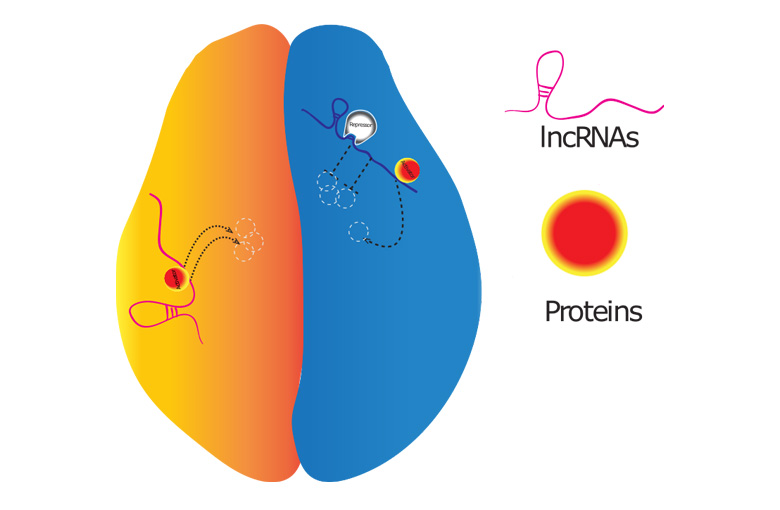 Line of Research 2
Fig. 2 LncRNAs can interact with activators (arrows) or repressors (T-lines) to activate or silence genes, respectively. This research aims to find novel candidate lncRNAs that potentially regulate the expression of protein-coding genes controlling brain development and function. Of pivotal interest will be the analysis of lncRNAs associated with disease during brain development and as a function of environmental clues such as stress diet, chemicals, and ageing.

Role of lncRNAs in phase separation, aggregation and in neurodegenerative disorders

Long non-coding RNAs (lncRNAs) are RNA molecules longer than 200 bases that lack coding potential. RNA contributes to forming membrane-less organelles such as paraspeckles and stress granules. Xist, the master regulator of X chromosome inactivation (XCI), induces large-scale heterochromatinization of the entire X-chromosome by accumulating in large granule-like assemblies. We recently suggested that Xist stabilises XCI by recruiting RNA-binding proteins by a mechanism of liquid-liquid phase separation (Cerase et al., 2019). Xist RNA has six conserved repetitive regions, named A to F, reported to be essential for its function. These regions sustain most interactions with proteins (Pintacuda et al, 2017). In particular, these regions interact with intrinsically disordered proteins, which are essential for phase separation (Cerase et al, 2019). We aim to create inducible KD lines of Xist-interacting proteins in mouse embryonic stem cells (mESCs) to establish which molecules are needed per cell to form a granule. We also aim to create inducible Xist deletions to show what regions of Xist are required for the process utilizing CRISPR/Cas9 technology. We aim to use all this data to simulate granule formation in wild type (WT) and perturbed cells. We will generate simple yet general mathematical models that can be applied to RNA-driven phase separation. Our approach can have broad applicability and relevance in pathologies such as neurodegeneration, especially in the context of anti-aggregation drug development.

Cerase lab is a part of QMUL Epigentics Hub